Traditionally the pathogenesis of thrombosis is based upon Virchow’s Triad: stasis, hypercoagulability and endothelial injury. What are the most common risk factors for venous thromboembolism?

Risk factors for VTE are predicated on Virchow’s Triad and include but are not limited to:

A 64 year old male on chemotherapy for colon cancer if referred for a painful calf x 24 hours that on Doppler imaging shows a popliteal DVT. What is the standard of care for a patient with a DVT in the setting of active cancer?

The CLOT trial was a multi-center RCT that randomized over 670 cancer patients to either dalteparin (month one: 200 u/kg sc od, months 2-6: 150 ug/kg sc od) or warfarin with a target INR of 2-3. Following 6 months of therapy the cumulative rate of recurrent VTE was 9 vs 17% in favour of the dalteparin arm which was statistically significant. Although there was no documented survival advantage, it is recommended that patients with cancer related clots be treated with a LMWH derivative for the duration of their chemotherapy.

A 28 year old pregnancy G1P0 8 weeks gestational age is diagnosed with a leg DVT. What is the risk of VTE in the pregnant population? What should she be treated with and for how long?

The principle behind this case is to recognize that the prevalence of VTE is higher in the pregnant population which is 2/ 1000 deliveries; a 4-5 fold increased risk compared to non-pregnant females. Over 80% of clots are in the venous system with 90% of them in the left leg later in trimester due to compression of the left iliac vessels from the gravid uterus.

Therapy should exclude warfarin at minimum during the 6th to 12 weeks of gestation to avoid the teratogenic effects including nasal hypoplasia and stippled epiphyses. Patients are placed on a LMWH with Factor Xa levels monitored to account for changes in weight and CrCl throughout the pregnancy and must continue on anti-coagulation for a minimum of 6 weeks post-partum.

Draw the coagulation cascade in its entirety. 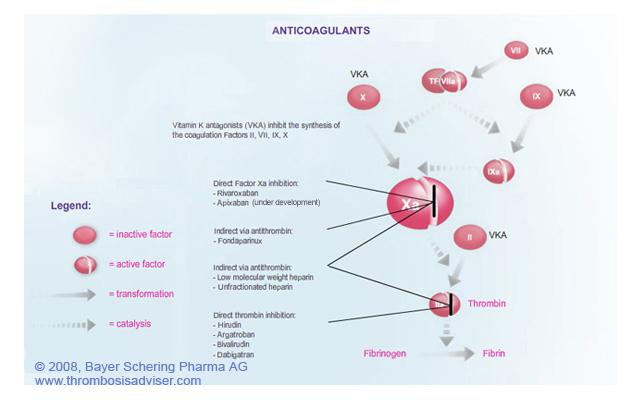 A 75 year old male presents to his GP with a complaint of palpitations. An EKG reveals that he is in atrial fibrillation. He is on a thiazide for hypertension but no other medications. Based on his CHADS-2 score, he would be a candidate for anti-coagulation to prevent stroke. What options would be available for someone in his circumstance?

The approved medications in Canada for non-valvular atrial fibrillation include warfarin to achieve a target INR between 2-3 and dabigatran at a dose of 150 mg p.o. bid. The largest trial (RE-LY) comparing Dabigatran to Warfarin was a double blinded non-inferiority RCT comparing these two dosing strategies in over 18,000 patients. The median duration of follow-up was 2.0 years with the primary outcomes being stroke or systemic embolism. The rates of stroke and VTE were similar between both arms, however there was a statistically lower rater of major bleeding an hemorrhagic stroke.