List the causes of secondary hypertension. What tests could you order to assess for these diagnoses?

Secondary hypertension is elevated blood pressure that results from an underlying, identifiable, often correctable cause. Only about 5 to 10 percent of hypertension cases are thought to result from secondary causes.

The secondary causes for hypertension can be classified as follows:

What are the 3 primary glomerular diseases that cause nephrotic syndrome, and name 3 secondary causes of each?

The term nephrotic syndrome refers to a distinct constellation of clinical and laboratory features of renal disease. It is specifically defined by the presence of:

Thrombotic disease may also be observed.

The classification is based on pathological findings:

Sometimes there can be associated secondary diseases that may be causative in nature.

A patient presents with hemoptysis and acute renal failure. What would be included in the differential diagnosis?

This presentation suggests the presence of a pulmonary-renal syndrome, which is a combination of acute glomerulonephritis with alveolar hemorrhage.

The pulmonary-renal syndrome can be caused by a variety of conditions, including Goodpasture’s syndrome which is associated with autoantibodies to the glomerular and alveolar basement membranes, and various forms of primary systemic vasculitis associated with serum positivity for antineutrophil cytoplasmic antibodies (ANCA), such as microscopic polyangiitis, Wegener’s granulomatosis and, less commonly, Churg-Strauss syndrome. This syndrome can be seen less commonly in association with systemic lupus erythematosus, systemic sclerosis, antiphospholipid syndrome, drugs (including propylthiouracil and hydralazine), Behçet’s disease, Henoch–Schönlein purpura, IgA nephropathy and mixed cryoglobulinaemia.

What are the stages of diabetic nephropathy? (GFR/clinical)

ACE inhibitor:
Examined the effect of the administration of placebo or captopril to patients with type 1 diabetes with overt proteinuria and a plasma creatinine concentration equal to or greater than 1.5 mg/dL (132 µmol/L). The likelihood of a doubling of the plasma creatinine concentration was reduced by more than 50 percent in the captopril group.

In the Irbesartan Diabetic Nephropathy Trial (IDNT), 1715 hypertensive patients with nephropathy due to type 2 diabetes were randomly assigned to irbesartan (300 mg/day), amlodipine(10 mg/day), or placebo.

At 2.6 years, irbesartan was associated with a risk of the combined end point (doubling of the plasma creatinine, development of end-stage renal disease, or death from any cause) that was 23 and 20 percent lower than with amlodipine and placebo, respectively, and the values were 37 and 30 percent lower for doubling of the plasma creatinine. These benefits were independent of the differences in the magnitude of blood pressure reduction among the groups.

In the RENAAL trial, 1513 patients with type 2 diabetes and nephropathy were randomly assigned to losartan(50 titrating up to 100 mg once daily) or placebo, both in addition to conventional antihypertensive therapy (but not ACE inhibitors).

Compared to placebo, losartan reduced the incidence of a doubling of the plasma creatinine by 25 percent and end-stage renal disease by 28 percent; the mean follow-up was 3.4 years. These benefits were again not associated with differences in blood pressure levels between the groups.

If a patient presents with nephrolithiasis and the following urinalysis, what type of stone would you suspect? How would you manage this patient? 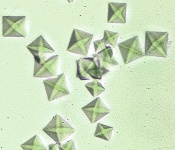 The mainstain of treatment of calcium oxalate stones is to increase fluid intake to reach the goal of at least 2 L of urine output per day. A reduction in calcium excretion by a low sodium diet (80-100 meg/day) may also be suggested. Low sodium excretion will enhance proximal sodium and calcium absorption, thereby decreasing urinary calcium excretion and stone formation.

Drug therapy can also be added depending on the cause. If there is hypercalciuria, thiazide diuretics may be helpful. Potassium citrate can be used in cases of hypocitraturia and type 1 renal tubular acidosis. For hyperuricosuria, treatment of choice would be allopurinol or potassium citrate.